“October is the beneficiary of increased listings in the month prior. It is expected that sales activity across New Zealand will continue to rise in the coming months, as restrictions ease further, travel limitations lift and those who previously held back listing their property do so. The demand is certainly there,” JEN BAIRD, REINZ CEO 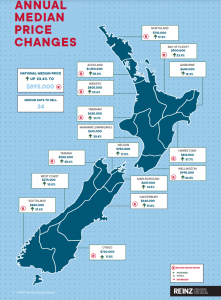 “The Canterbury region reached a new record median house price this October of $668,000 – a 31.0% increase year-on-year. Four districts in Canterbury also reached record highs in their median house prices: Ashburton District ($500,000), Christchurch City ($685,000), Selwyn District ($815,000), and Waimakariri District ($685,000). Canterbury has shown record prices in the past four consecutive months, and the Selwyn District has the longest median streak of all the territorial authorities, with six in a row.” JEN BAIRD, REINZ CEO

“Compared to this time last year, investor numbers have increased, with some looking to increase their portfolios. The Canterbury market is still competitive with a good pool of tenants. Levels of inventory are still low, with a 30.6% decrease year-on-year, and whilst listings had an increase month-on-month, they are still down on what they would normally be for an October month. When Auckland’s borders open, it is expected that some Aucklanders will move to Canterbury or its surrounding areas.” JEN BAIRD, REINZ CEO